HM is Honored to Participate in the Following Charities

“If you can’t feed a hundred people, then feed just one” – Mother Teresa

Our entire team often finds themselves involved with charities, churches and non-profits, many of which we volunteer as well as donate. This page is intended to showcase select charities we believe have made the greatest impact on those who are less fortunate and for those who may be in need of legal services or provided additional medical care.

Ethiopia is the second poorest nation in the world. However, unlike many African countries, Ethiopians, who divide among Muslim, Jewish and Orthodox Christian, peacefully co-exist. Given the rampant poverty and general lack of education, however, fear and misinformation surround HIV/AIDS, which remains widespread in a country where medications are very limited.

Founded in 2006, Executive Director Marla Hodes – wife of founding partner Dan Hodes – explains the importance of the organization: “We educate the women about their HIV status, nutritional needs, hygiene, sanitation, and correct medicine management. We also ensure the children are enrolled in school. And because it is optimal to keep these women with their children, EFF makes every effort to keep the mother-child bond strong, while supporting a sustainable path toward independence for the young mothers. And importantly, these women come to understand that they are not ‘bad’ or ‘cursed’ and they are not alone. Beautiful friendships are made and a new life begins. EFF is committed to these women and their children.” The Veterans Legal Institute® (VLI) provides pro bono legal assistance to homeless, at risk, disabled and low-income current and former service members to eradicate barriers to housing, healthcare, education and employment and foster self-sufficiency. VLI also advocates on behalf of its clients by providing community education and policy advocacy in an effort to increase awareness, resources, and overall protections to current and former members of the US military. From promoting peace and health to improving education, Rotary International has been a 20 year favorite of Jeff Milman, a senior partner and trial lawyer at HM. In its most ambitious initiative to date, and in partnership with the Bill and Melinda Gates Foundation, Rotary International has pledged more than $1 billion dollars to end polio forever. Last year only five cases were reported. “Right now, every time a new case is identified, it really could be the last one the world ever sees,” Germ said (Pictured right with Bill Gates).

One of the largest charities founded over 110 years ago, Rotary unites more than 1.2 million members worldwide through more than 35,000 local clubs, with a combined 16 million volunteer hours each year. 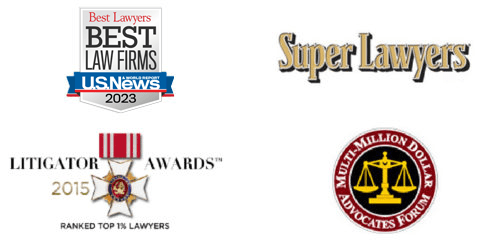